In 2012 the agency I ran with my husband was approached by one of the founders of GotCourts, or mytins.ch as it was then known, to help them rethink their product and services. As an Experience Designer, I was heavily involved in all phases of the project, from research and synthesis to idea generation, prototyping, and testing and validation.

GotCourts got the first investment based on the blueprint for the new platform. Together with my team, I transformed the old system into a comprehensive platform for tennis players and clubs. It helped the company to grow from a small startup to the largest platform for racket sports in Europe. We helped GotCourts team to integrate good design practice into their processes. We achieved this by using the process I explain in detail on the Process page.

If you prefer to listen rather than read, you can see and hear me talk about this project at DesignLab Berlin in February 2018.

We did not know much in the beginning and a round of stakeholder interviews helped us to see all the different perspectives of all the people who affected the product in any way. Next came the competitive analysis where our aim was to find gaps in experience and to improve upon these gaps in order to create a more competitive product. However, we needed to talk to the people who used the platform on a daily basis.

A survey of 150 people helped us segment users for the meat of research: contextual interviews and observations. In the course of two months, we interviewed 25 people in their homes, workplaces and at tennis courts. As an amateur tennis player, my colleague participated in an amateur tournament where we spent most of the time observing. My team talked to a few dozens of tennis clubs and tried to understand their perspective, rules, and requirements.

What we found was that booking a court is a complex activity. It involves plenty of phone calls and messages between people with busy, unstable schedules. Popular hours have been constantly unavailable. People cancel, often at the last minute. Coaches have schedules and needs which are more demanding than the ones of players. They need multiple connected slots for students, and cancellations are frequent. Also, tennis clubs have extremely complex policies, which results in two group of problems: clubs have difficulties managing rules and utilizing courts and players have difficulties with membership and scheduling. It is also incredibly difficult to find the right partner with just the right experience, style and personality.

We accumulated a massive amount of data recorded as text files, video and audio files, and a heap of paper notes. Together with the GotCourts team, we made sense of this data mess by going through all material and extracting facts onto sticky notes. Yes, now we had a ton of sticky notes, but through multiple affinity diagramming sessions, we rearranged the stickies over and over again with the goal of forming meaningful groups of facts and patterns. Eventually, patterns emerged and they formed six persona skeletons – six groups of facts that describe distinct behaviors – four tennis player personas and two club personas. 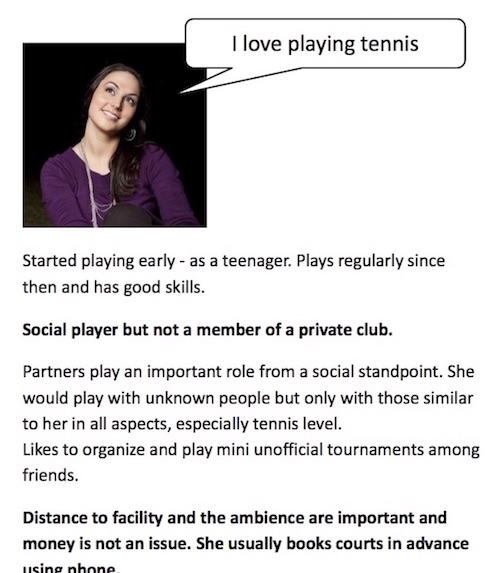 As personas are quite static, we decided to breathe some life into them by writing scenarios. “Booking a court” or “Joining a tournament” provided the much-needed voyeurism necessary to empathize with people behind personas.

A set of user journeys was created to visualize scenarios, actors in scenarios and relationship between them. It was a challenge to do as we needed to map out all the touch points between players, clubs, and GotCourts.

We began by translating user needs into feature ideas by dividing the needs into basic and latent and deriving basic, performance and excitement features. A card sorting exercise with stakeholders and users, current and potential, helped to sort out ambiguous information architecture.

Through multiple group ideation (sketching) sessions with GotCourts team, we explored myriad of ideas. At this stage, we aimed for quantity – the more ideas, the better. The goal was to explore the problem spaces by relaxing constraints and exploring for a potentiality. The outcome was a solid number of good ideas and a shared understanding of what the product and the service could and should be. 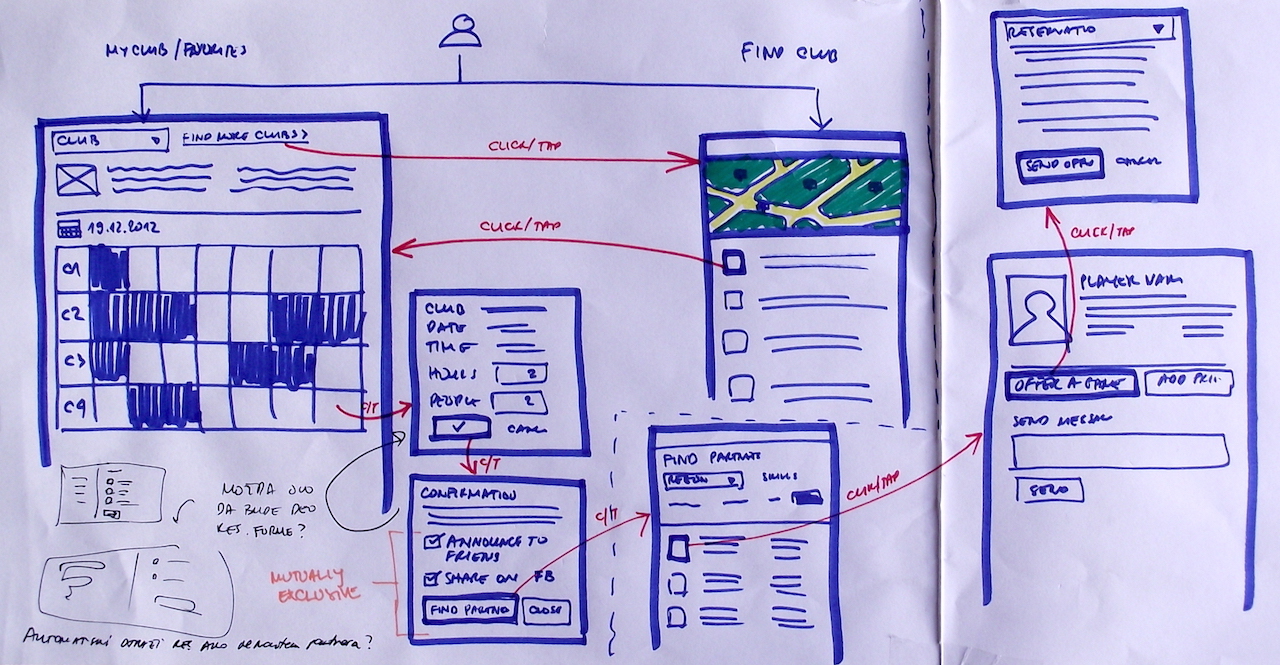 Parallel to and after these sketching sessions, we conducted validation of paper prototypes – high-resolution sketches uploaded to the InVision app. Based on the results from the first round, we turned these sketches into wireframes and did further testing rounds using them. They were also later used as detailed specifications for platform developers.

Based on the functionality described in these specifications and design strategy document, GotCourts was able to obtain the first investment that made growing possible. 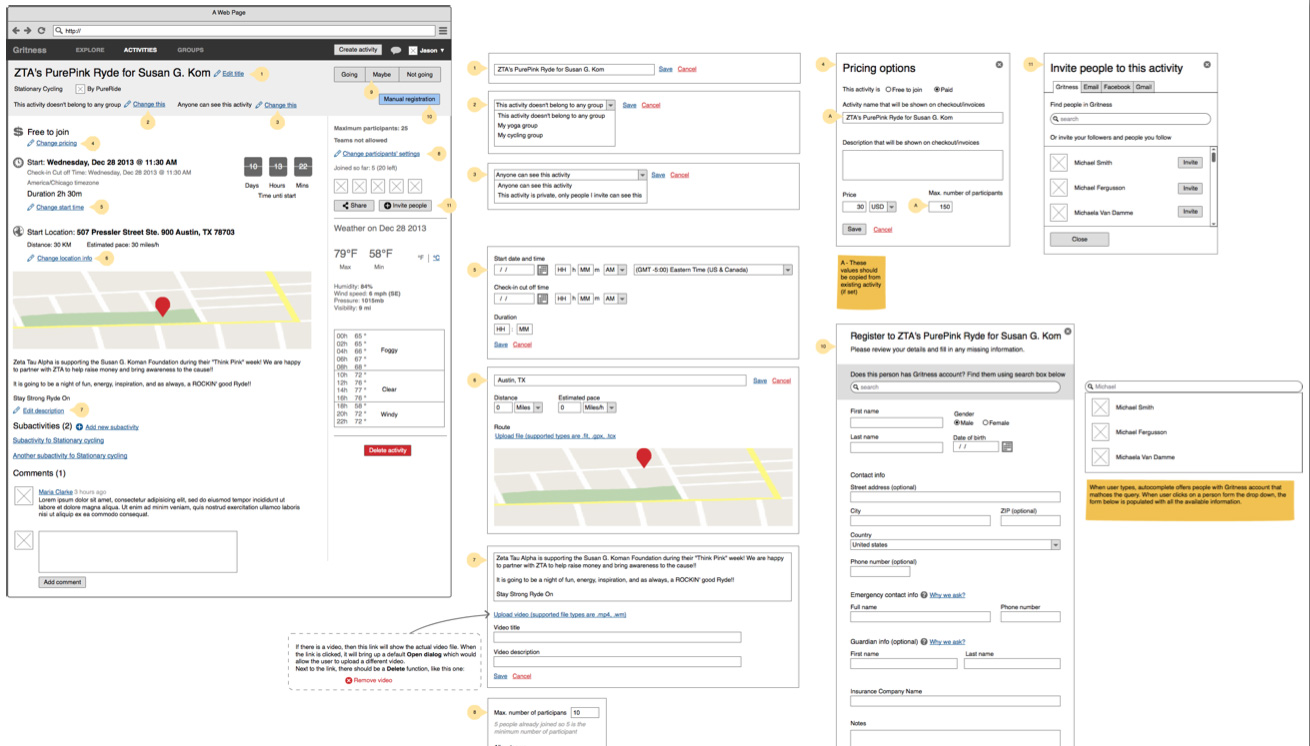 We carefully designed finding new clubs by providing club discovery by location or personal preferences. When booking a court, we made sure that it is almost impossible for a tennis player to leave the search empty-handed by providing adjacent timeslots, nearby clubs and playing announcements from friends. The waiting list was one of the delighters for both clubs and players. It enables players to get notified if desired timeslots are freed, and helps clubs minimize gaps in the schedule. Finding partners and opponents was one of the major problems for users. We designed a player network where players get matched by location, interests, and self-assessed skills.

Kiosk app for tennis players to see future and present schedules and book courts while at the club enables, mostly, senior players who don’t have or are not comfortable enough with mobile phones or internet to enjoy all the benefits.

Info panels were designed to be located at prominent spots at tennis clubs (waiting areas and cafes) and allowed players to see who is currently playing and when is their slot, all while enjoying drinks and chat. 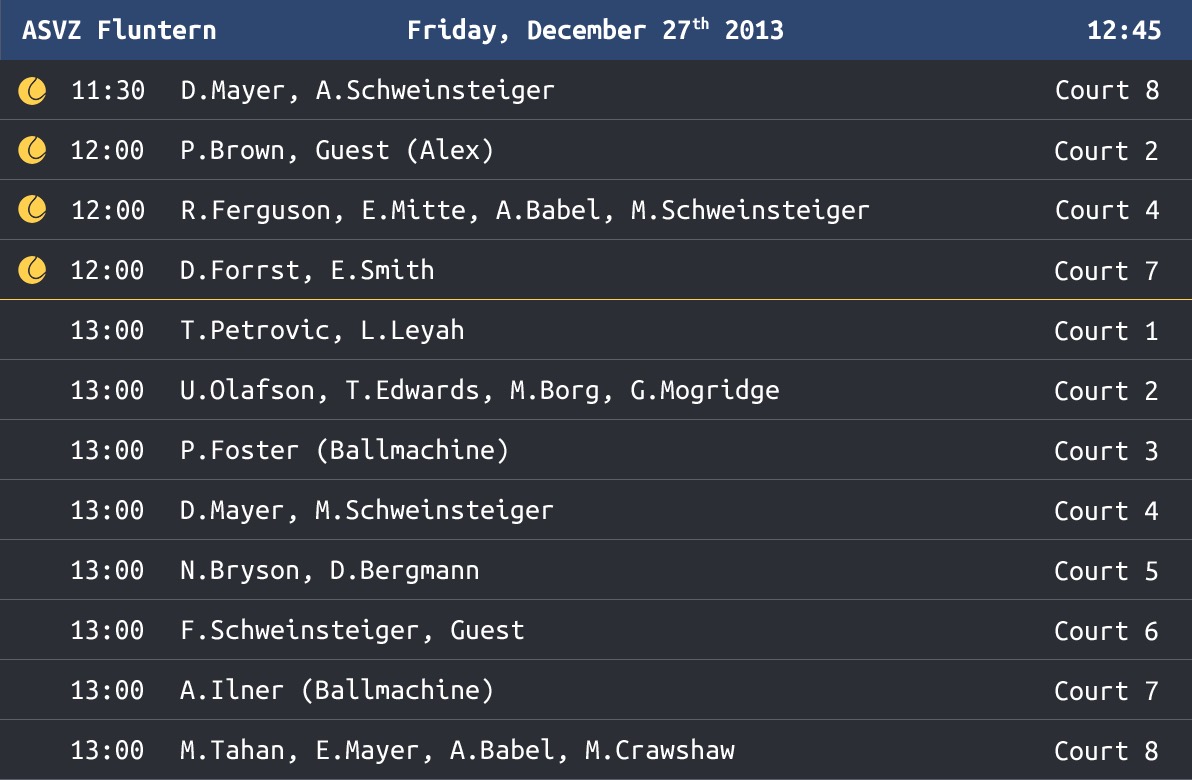 When we reflected back on the research we realized we could’ve started with probing the problem space with prototypes during the research instead of waiting to complete it. It prolonged things and made our client a little nervous at the beginning. I believe we could have spent more time exploring ideas, but since it took us a lot of time to conduct the research and synthesize it, we needed to move fast. Also, in hindsight, a huge amount of time was spent creating detailed wireframes that could have been replaced with HTML and CSS prototypes.