The beginning of November was marked by two great events. The first, our 10th anniversary and the second, wwvrsac – a local conference on doing business over the Internet in Serbia. This post is dedicated to the latter.

Conference was held in Vršac, in a relaxing setting of hotel Villa Breg, situated on Vršac mount with terraces overlooking the spires and rooftops of this lovely city. The whole event was well organized in four blocks of talks with a moderated panel discussion at the end of each one. I will take this opportunity to thank Ivan Ćosić and his team for having the energy to produce such an inspiring event.

What comes next are my sketch notes from the talks.

Day one began with talks by three very good speakers. Slobodan Vučković talked about the economy of the 21st century, while the ever enthusiastic Slobodan Marković talked about his fight against the windmills of Serbian bureaucracy. 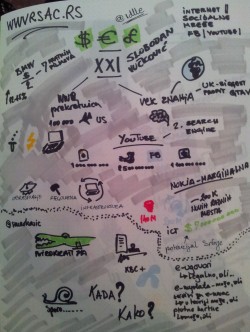 The last talk was reserved for Janko Jovanović and his talk on how to be a part of the world while living in Serbia – what you need to do and how much you need to work on yourself. 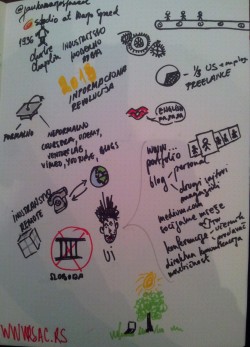 After lunch, there were three unexpectedly good talks (unexpected for me, that is). First up was Gordana Čomić, one of the rare ladies on the Serbian political scene, breaking our illusions on all the nonsensical things we have to deal with in everyday life in Serbia and how to distinguish between a cat and a tiger. 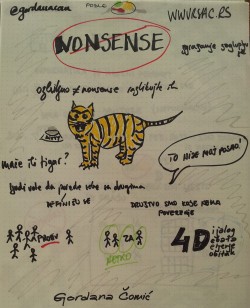 Saša Popović and his talk on Uči slobodno project showed us that if you want to help the world to change you need to start doing something about it. He’s changing the way kids learn maths in primary school. 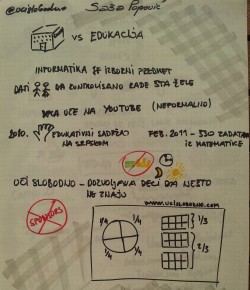 Last speaker of the first day, but definitely not the least was Ivan Minić. He talked about all those successful people who’ve had everything set against them but still persevered. 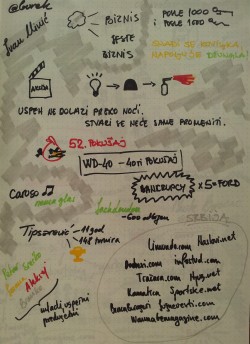 Opening talk was given by Miroslav Georgijević, a photographer whose work I’d like to have on my wall, and it was a deeply personal story. Pavle Borovac was up next with a story on his second life – from an architect to designer at not such a young age. 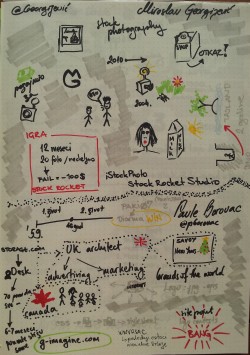 Aleksandar Vacić talked about his success as an iOS app developer and how much he had to sacrifice to get to where he is now. 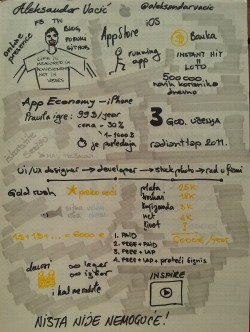 The last three talks of the day were, as I said, reserved for successes of three companies whose founders were not ready to let go. Siniša Komlenić talked about ThemesKingdom and Ilija Studen about his brainchild – ActiveCollab. 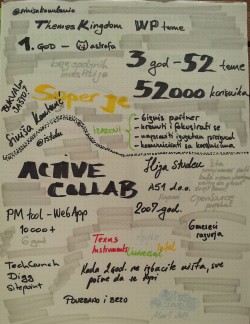 The day closed with a talk from Ratko Božović, user acquisition manager at Nordeus, a rivetingly successful company based in Serbia. 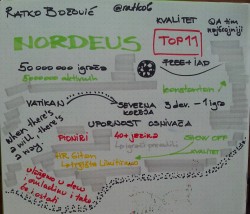 This is my first set of sketch notes ever and I have strived to capture the essence of the talks. Since I’m still practicing, the ratio between text and sketch is still in favor of text. I’ll get better, I promise.